Mark Williams, MP for Ceredigion, stepped back in time this week to take a walk down WaterAid’s Victorian street, experiencing the sights and smells of an era when open sewage ran through our roads and rivers, to mark 150 years of Britain’s modern sewers. 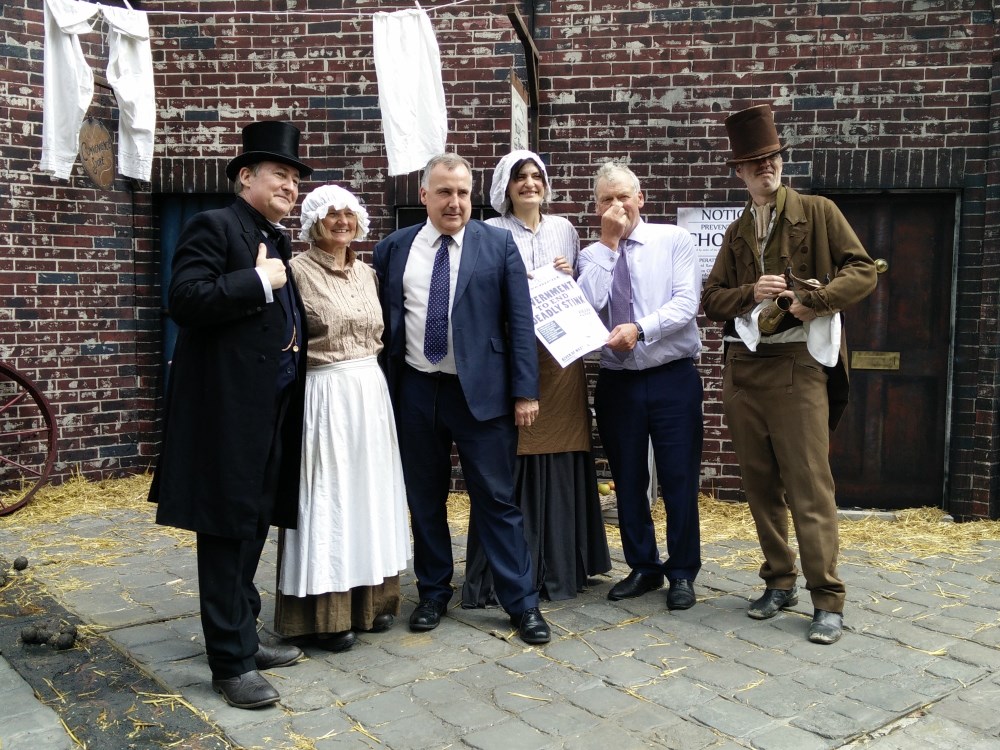 More than 100 parliamentarians met characters from Victorian times to discover what life was like during the Great Stink of 1858 to highlight WaterAid’s call for the UK Government to lead the way in ending the global water and sanitation crisis.

Mr Williams also met some of the 115,056 supporters who signed the charity’s ‘Make It Happen’ petition, who came from across the country to discuss the importance of ensuring everyone everywhere has clean water to drink and somewhere safe to go to the toilet.

“It has been an eye-opening day, seeing what life was like in Victorian Britain when people lacked access to safe water and there was no decent sewerage system. Investment in water and sanitation had a huge impact on our health and development, and that these are key to achieving a healthier and more prosperous world.

“I am proud that the UK has made a significant commitment to ending global poverty, investing 0.7% of our national income in international development – and I am proud that it was Liberal Democrat influence during the Coalition Government which secured this achievement. As we develop the Sustainable Development Goals for addressing global development, it is clear that water and sanitation must play a central role.”

Britain’s first life-saving sewerage system was created following the ‘Great Stink’, when the stench of the polluted Thames was so unbearable, it sent MPs running from the House of Commons clutching handkerchiefs to their faces and spurring them into action to clean up the city.

The opening of the first modern sewage pumping station in 150 years ago, designed by Sir Joseph Bazalgette, helped prevent cholera outbreaks in London. The disease had had a devastating impact across the country since its arrival in 1831, similar to the effect of Ebola in West Africa today. This marked the start of Britain’s drive to protect public health through good sanitation with similar transformations following across the country.

This year also has a global significance, as the framework for the development priorities for the international community until 2030 is being agreed in September.

WaterAid’s Chief Executive Barbara Frost presented the ‘Make It Happen’ petition to Baroness Verma, Parliamentary Under Secretary of State at the Department for International Development.

Barbara said: “Our own history shows how water and sanitation can transform a nation, helping to create a healthier and more prosperous society.

“Today, 650 million people across the world still lack access to clean water and 2.3 billion have nowhere safe to go to the toilet. Life in a densely populated slum bears far too close a resemblance to UK cities in the 1800s, representing a real and growing threat to global health and stability. Diarrhoea caused by unsafe water and poor sanitation is the second biggest killer of under-fives worldwide, claiming the lives of 1,400 children every single day.

“The stink may be a bit further from Westminster now; but that’s no reason not to act. With the right political will, we can solve the global water and sanitation crisis. This year we have a unique chance to right this wrong as world leaders agree the new Sustainable Development Goals to eradicate poverty over the next 15 years. Only with investment in sanitation can we achieve a safe and secure future for everyone everywhere.”

A recent survey, commissioned by WaterAid and conducted by ComRes in May, showed that people in Wales believe most UK foreign aid goes to water, sanitation and hygiene and that this is rightfully the sector that should receive the greatest proportion of investment.

However, water, sanitation and hygiene currently receives a small fraction of UK aid funding – just 2%, compared to 20% for health and 13% for education.

WaterAid is calling for increased investment in water and sanitation in order to achieve improvements in health and other development areas, as having access to these simple services is the foundation to climbing out of poverty. For example, for every £1 invested in sanitation there's a return of around £5 in increased productivity.

The charity is calling for the UK Government to:

• Increase the proportion of aid spent on water, sanitation and hygiene by at least 1% every year over the next parliament to enable the UK to become a leader by 2020.

• Maximise the impact of UK Aid investments by making sure that water, sanitation and hygiene services are in all health clinics, schools, maternal, newborn and child health strategies, and plans to tackle gender inequality.

• Support the adoption and implementation of a dedicated Sustainable Development Goal for water and sanitation, with targets for universal access to basic water, sanitation and hygiene by 2030.

Find out more at http://www.wateraid.org.