Welsh Lib Dems ready for the fight in Ceredigion

Speeches were heard on the night from Leader of the Welsh Liberal Democrats Kirsty Williams AM, as well as Mrs Mary Bott MBE, and Mark Williams.  Entertainment was provided by Elinor Powell’s excellent ‘Sgarmes’.  The event was hosted by Cardigan’s Mark Cole and Aberaeron’s Elizabeth Evans, and Presidents for the evening were Lampeter’s Mr and Mrs Picton Jones. 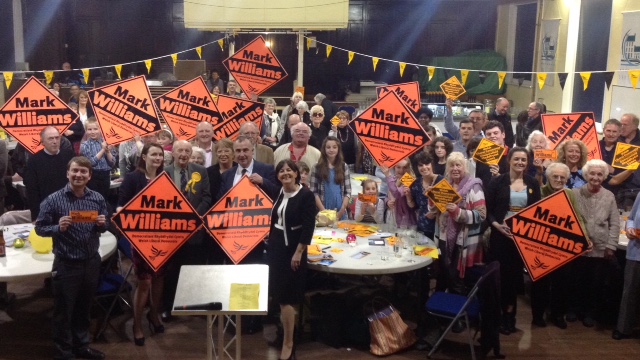 Mark Williams spoke of the Lib Dems’ achieved commitments in this Parliament, including cutting taxes for lowest earners, restoring the earnings link with pensions, and the hallowed Lib Dem priorities on constitutional reform working towards home rule for Wales.

Mark told the crowd of his proud achievements as a strong independently minded voice for Ceredigion, campaigning on issues in Parliament such as child neglect, support for small businesses who have been mis-sold financial products, and establishing a grocery code adjudicator with sufficient teeth in order to be able to properly protect farmers.  He spoke of his local record, working hard to represent constituents on thousands of issues over his years as their representative.  He stated that he and the party are ‘ready for the fight’ in Ceredigion, in the build up to May’s election.